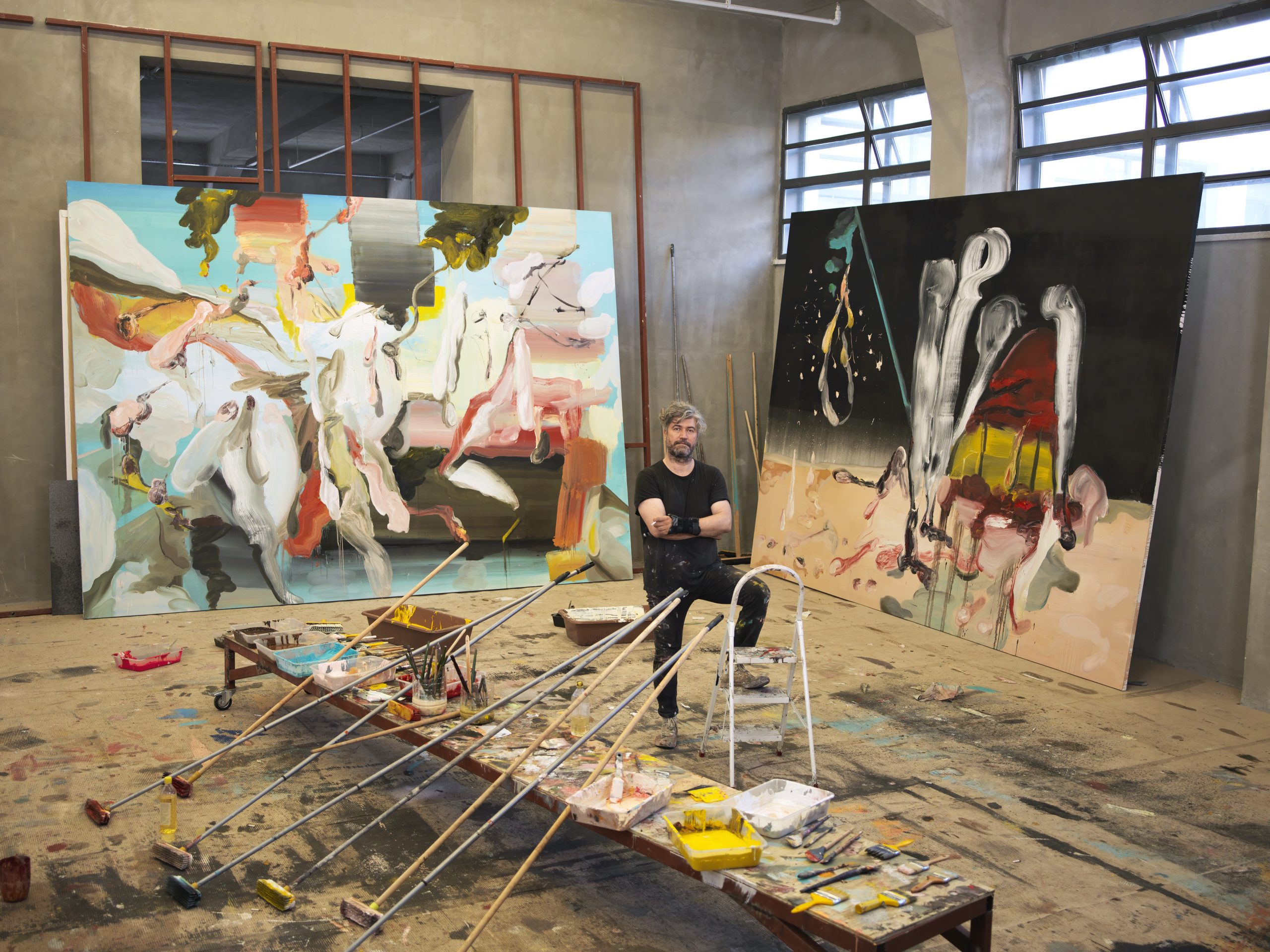 In 1970, Zümrütolu was born in Konya. In 1996, he received his degree from the Fine Arts Faculty of Izmir Dokuz Eylul University. After that, he traveled to France, Belgium, and the Netherlands to continue his schooling and pursue professional courses. His paintings offer a formal approach to the subject and are reminiscent of Physical Abstraction and German Expressionism. Additionally, the artist's work is driven by the strength and forces that are revealed in the fluidity of the images and the use of color. Despite being called the "Turkish Francis Bacon," Zümrütolu's composition and technique differ significantly from those of the Irish artist. The dynamic figures of the artist disappear into the canvas's substance and resurface in fresh forms. On the other hand, the Turkish artist's use of aggressive brushes and chromatic diversity adds a fresh layer of tension and irony to his work. Zümrütolu is a well-known artist who has had shows at foundations and museums all around the world. The artist explores existential themes in his abstract expressionist works and queries the fluid connection between two dissimilar artistic fields. The following three forces can be seen in Zümrütolu's artwork: Vertical movement includes falling or rising, spasming, stretching, opening, hanging, rhythm, and body line; Violence (paint intensity, emotion, sensation, and painting body), and; Dimension (space, space, growth, emptiness, an opening that draws the body in). The artist lives and works in Istanbul, directly targeting the nervous system by "seizing" these forces. 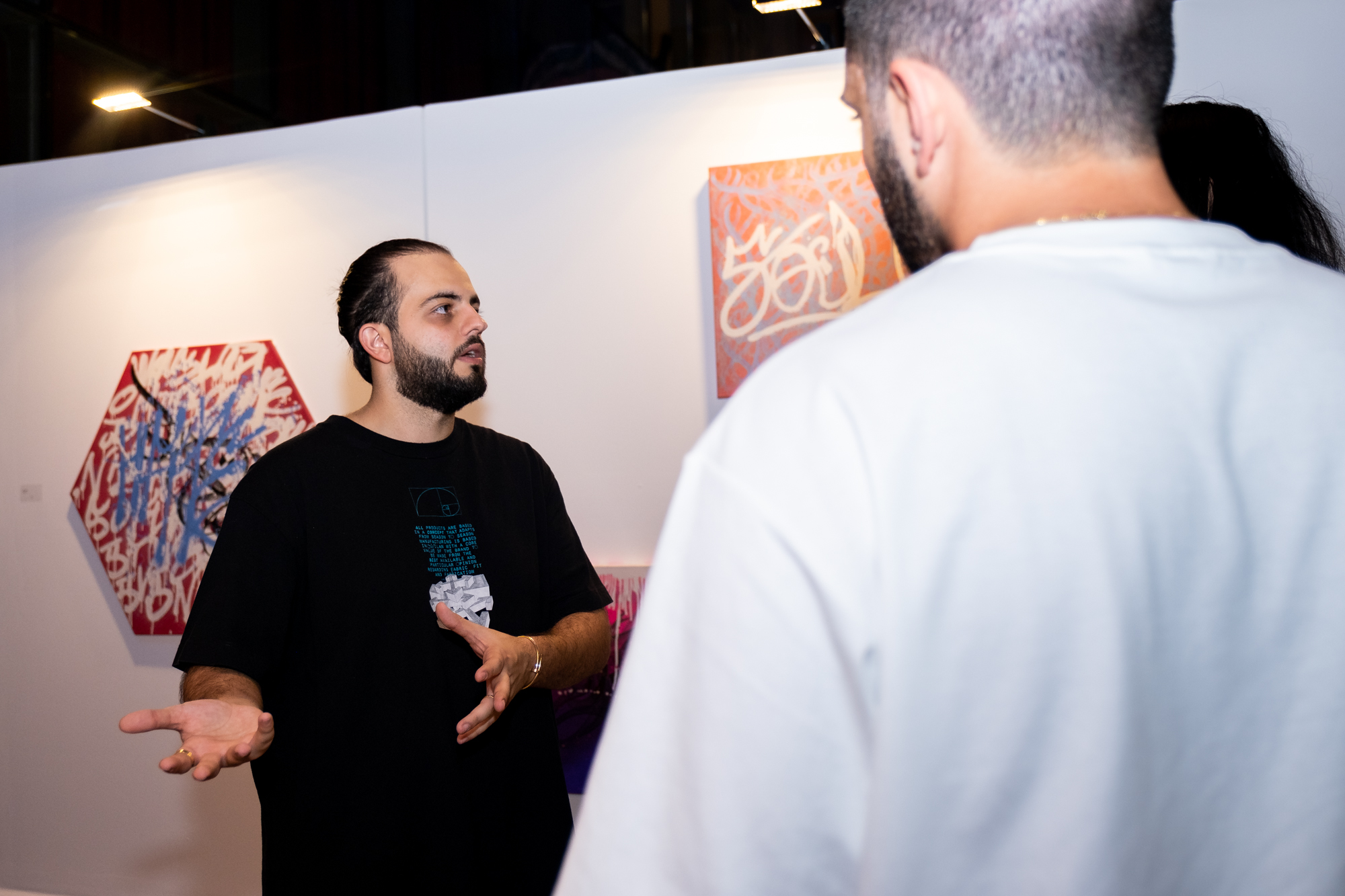 Foad Hamzeh is an experienced calligraffiti artist also demonstrated history of working in the marketing industry. Hamzeh is an American University of Dubai (AUD) University of Architecture (Art and Design) graduate. Additionally, he spent two years studying Arabic calligraphy with renowned calligrapher Wissam Shawkat. Hamzeh devised his own Arabic font, “Al-Fouad” which is used for Arabic graffiti. Young artist Foad Hamzeh, nicknamed “FH.Visual”, is known for his three-dimensional “calligraffiti” that combine calligraphy and graffiti (wall drawings) and rich in bold colours. Following the significant interest shown in the artwork he contributed to at the "Art of the World Dubai" exhibition early last October, he displayed his outstanding collection of 3D calligraphy. The curiosity of a sizable number of foreign visitors in the calligraphy paintings done in the calligraffiti technique was noteworthy in the exhibition presented at the Dubai World Trade Center. 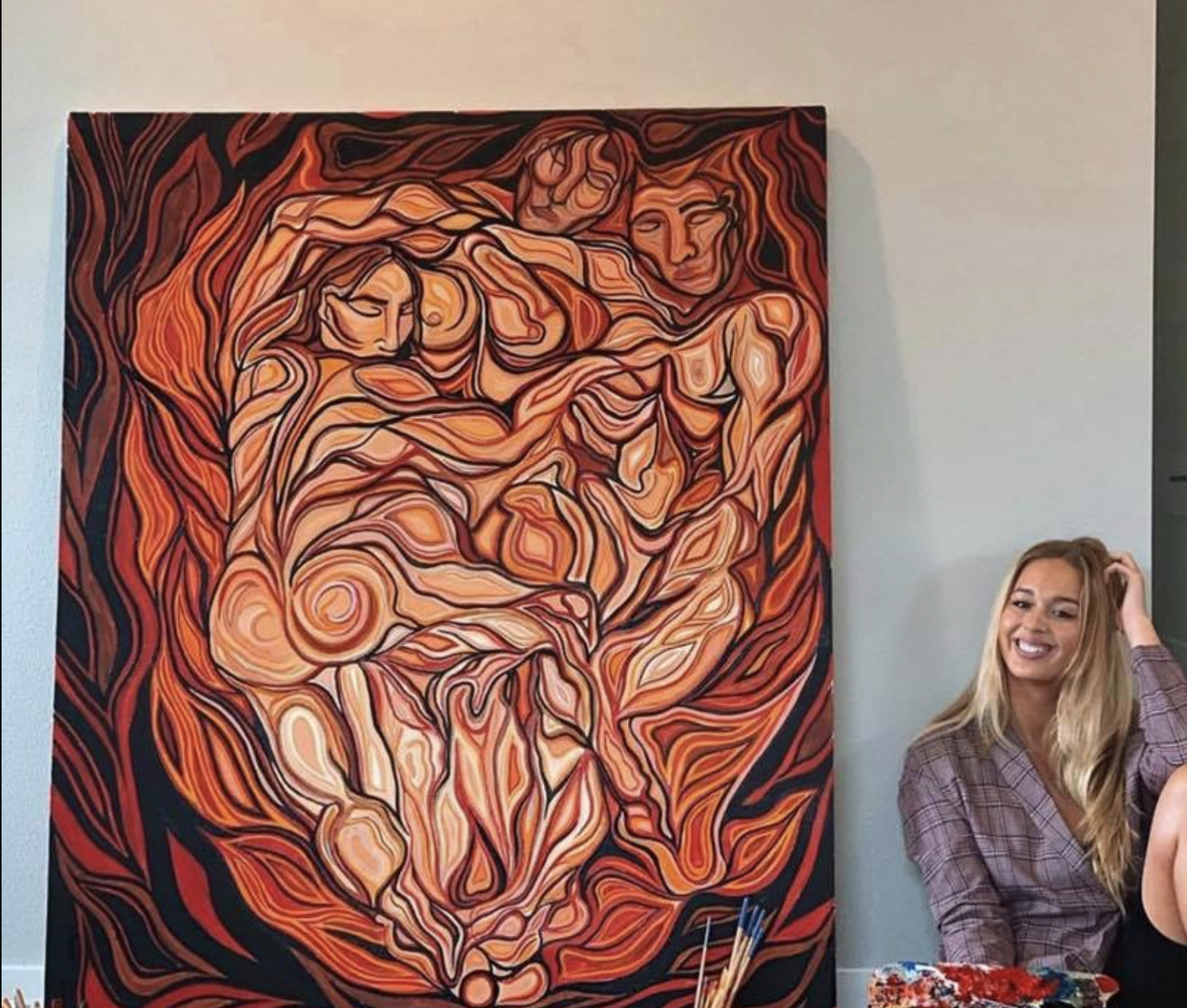 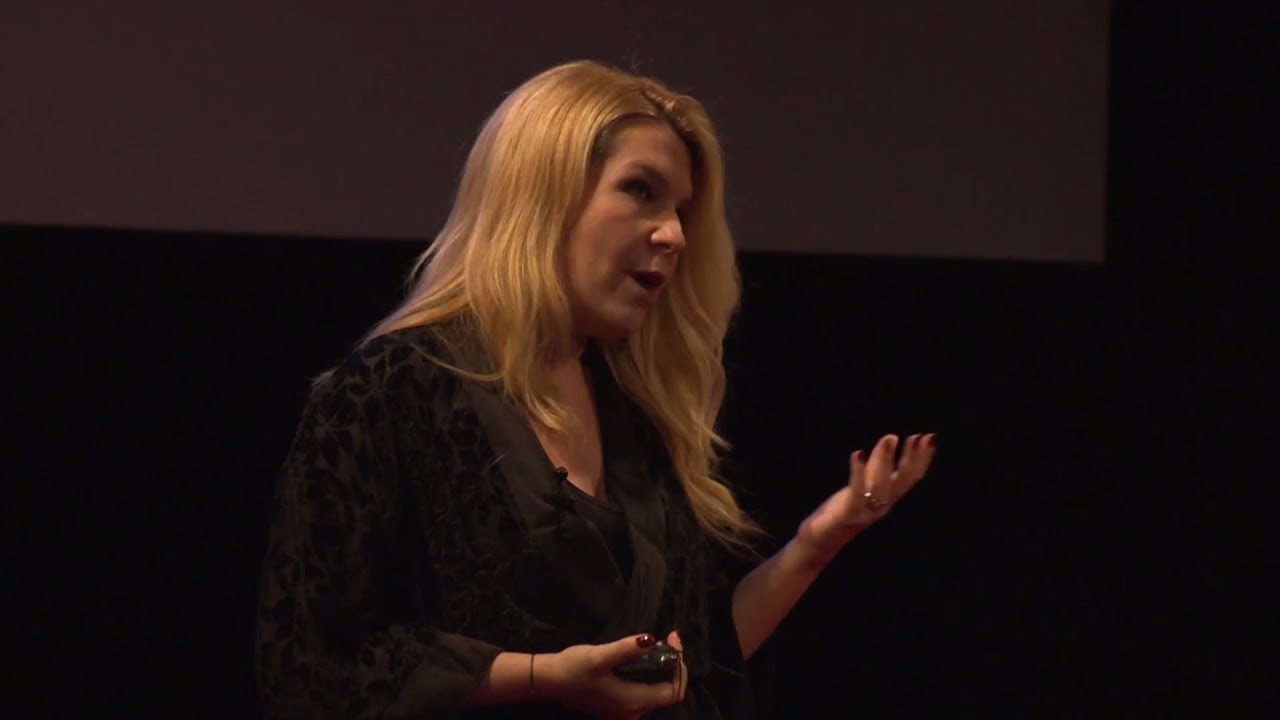 İdil is a Master of Fine Arts graduate of London's Chelsea College of Art and Design. With the arrangement of fragments that repeat like noises, lkin's collages have rhythm and cyclicality. Ilkin investigates the use of the voice as an experimental musical instrument while conducting study on the human body as a musical instrument. Large-scale photo collages by her are primarily inspired by calligraphy, marbling, minimal music, rugs, and tiles. She makes repeated patterns akin to those found in minimalist music or traditional Islamic art. The consuming habits, lifestyle, and economic cycles that force us to participate in them are what define her compositions. She is always thinking about rhythm, repetition, echo, light, and reflection as a result of seeing, observing, believing, obeying, and mimicking. Her use of several planes to organize and define her images enables viewers to read her compositions in terms of both time and place. A dynamic combination of painting, photography, and print is produced by the fluid anamorphic forms flowing in and out of the visual field due to digital interference. İdil İlkin presently resides and works in Istanbul. 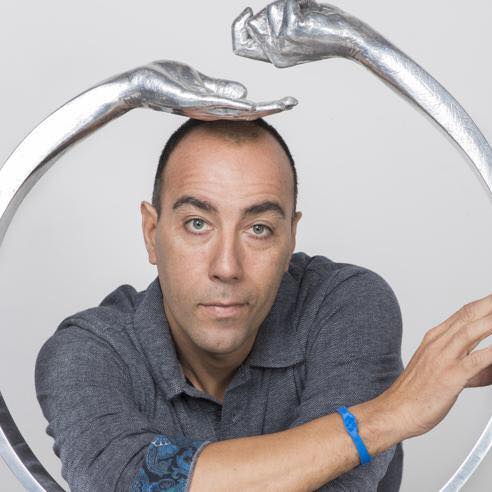 Quinn spent his formative years in both Italy and the United States after being born in Rome on May 7, 1966. He intended to become a surrealist painter while attending the American Academy of Fine Arts in New York. However, at the age of 21, he realized that sculpture was where his future lay because it could better utilize his vigor and creativity. Leading figurative sculptor Lorenzo Quinn is an Italian contemporary artist whose work is influenced by greats like Michelangelo, Bernini, and Rodin. His imposing public art and smaller, more personal pieces, which have been exhibited abroad, convey his devotion for timeless principles and real emotions. His expressive recreations of human hands are what he is best known for. He claims, "I intended to sculpt what is regarded as the hardest and most technically difficult region of the human body." The ability to love, hate, create, and destroy are all contained in the hand. In addition to being included in numerous private collections throughout the globe, Quinn's work has recently participated in international exhibitions. 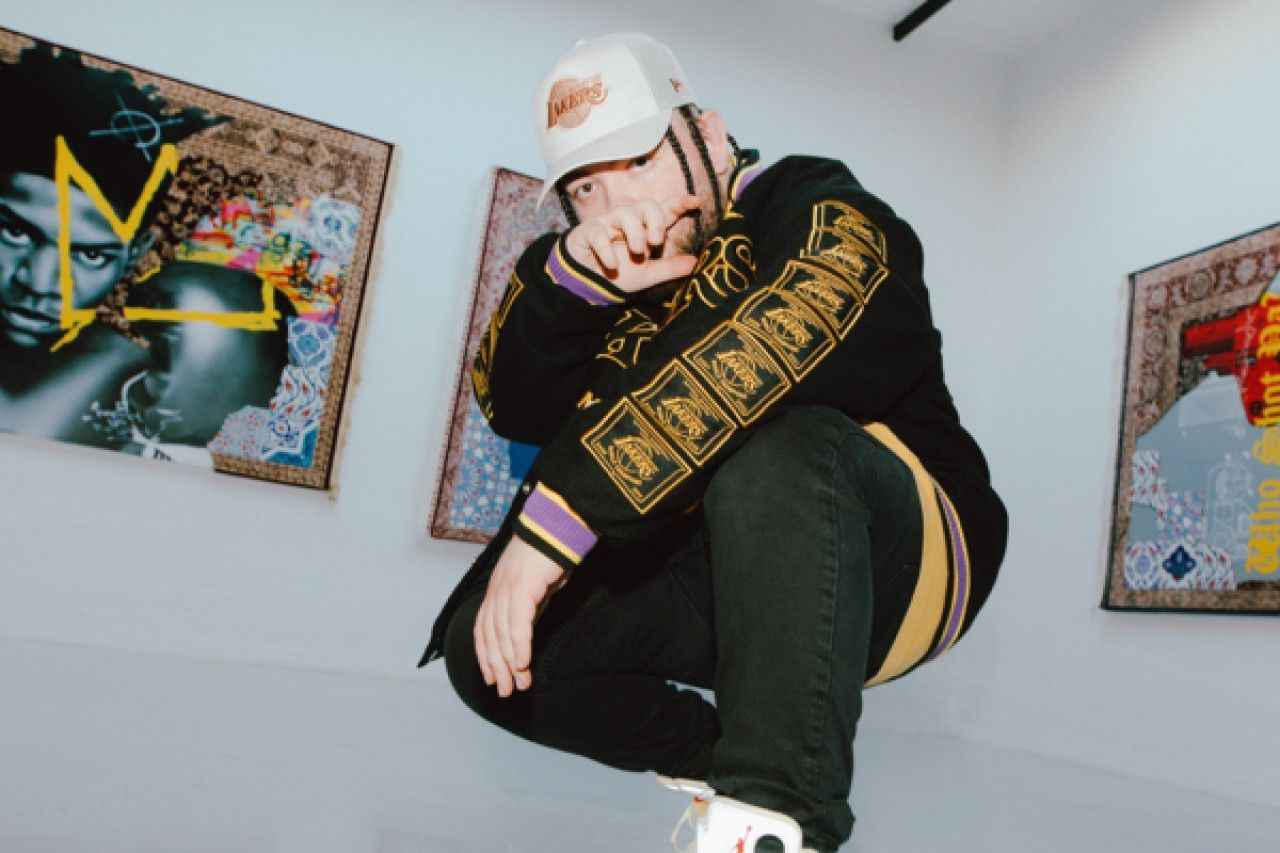 Mr. Besk is an Istanbul-based street artist. Besk developed an interest in graffiti art during his childhood, and his skills in this area started to emerge then. His love of color and his interest in painting inspired him to create art and become an expert in this area on the streets. He studied and successfully completed a fine arts high school before earning his graphic design bachelor's degree. Realistic sketches of famous people who have made an impact on history all across the world are the foundation of the artist's distinctive style. He represents the dream world with his distinctive style by fusing the portraits he created with examples of contemporary art and ethnic textures.